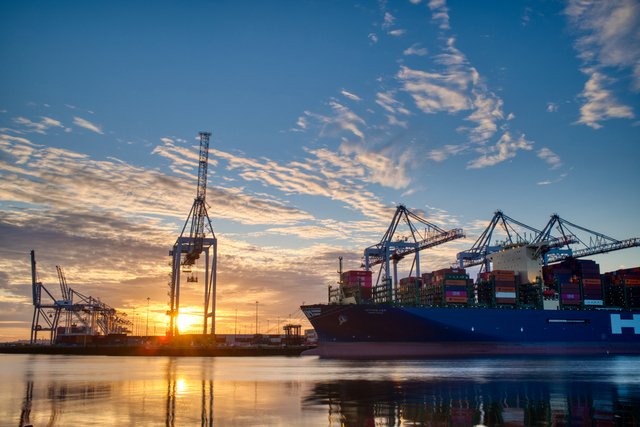 It could take five years for UK ports to get back to pre-pandemic freight levels, with rising costs, bottlenecks, driver shortages and Brexit delaying recovery. In 2022, there could be even more disruption due to labour disputes and logistics issues, costing British businesses millions. According to research, port delays have already caused 1 in 5 companies to lose potential business.

Where are the busiest ports in the UK?

With almost 40 million metric tons of cargo handled in the first three quarters of last year, London is the busiest port in the country, followed by Grimsby & Immingham in Lincolnshire County, handling 36.8 million metric tons. The Port of Felixstowe is actually Britain’s largest and busiest, but it had the most cancellations of any European port in the last half of 2021, putting it in seventh place. 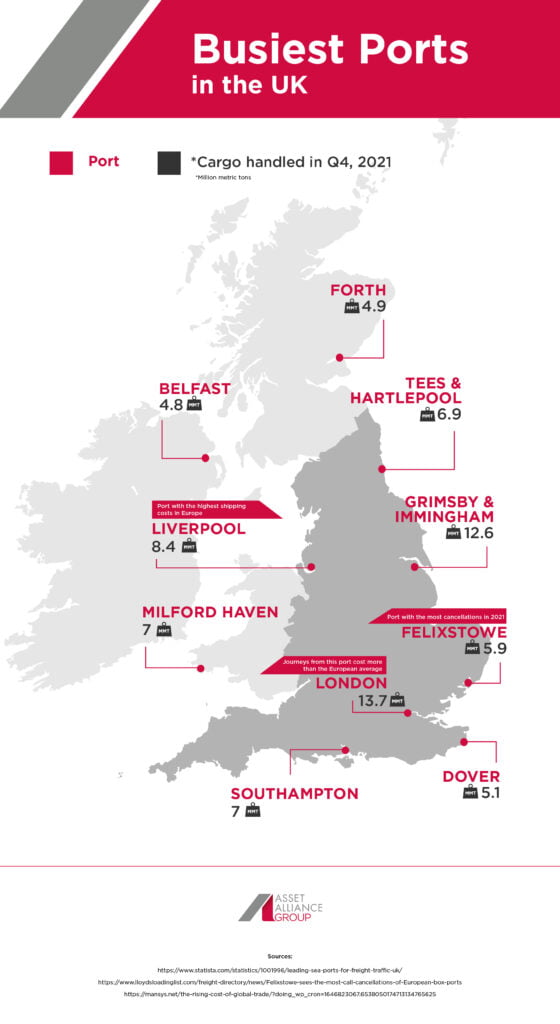 Three of the 10 busiest ports in the UK are also the most expensive in Europe.

Due to supply chain issues, the country currently has the highest shipping costs on the continent.

The average cost of sending a 20 ft container from the world’s busiest port in Shanghai to the UK is 24% higher than any other port on the continent. Liverpool, Southampton and London cost more per journey than the European average of £6,409, at £9,112, £8,306 and £7,900 respectively.

Port bottlenecks and increased stockpiling are still widespread, and 75% of companies in the container logistics industry plan to rethink their logistics strategy for 2022. One of the biggest challenges this year for more than half of those surveyed is finding slots on vessels. The HGV driver shortage is another major blocker. Haulage shortages at the country’s busiest ports cause delays of up to 10 days.

Fortunately, it looks like the driver shortage is slowly improving. With a gap of around 45,000 drivers, 27,144 HGV vocational tests were taken at the end of last year – a 54% increase on the year before.

How can businesses plan?

Businesses can do a few things to plan around delays and bottlenecks this year.

“With sites located close to all the major ports; Manchester, central to Liverpool and Grimsby /Immingham, Ipswich covering London and Felixstowe, Newmains supporting Scotland and our new office in Belfast covering Northern Ireland we are situated ideally to support those who choose shipping via port or air for their freight movement.” – Brian Kempson, Sales Director, Truck and Trailer Sales

Are you ready for this year's @ITThubEvent? 🚚 The event is this Wednesday and Thursday and our Contract Hire, Bus & Coach and Vendor Finance teams can't wait to see you at @Farnborough_Int.
Registration is free: https://lnkd.in/eijESg4v

Great to be back @BritishGT #silverstone500. Proud to support team @JonnyAdam with @flickhaigh and wow another win for @WJenkinsRacing #ginetta and podium pace for @GBruntonRacing in #gb4championship. Thanks to the garage teams, our guests and all at @BRDCSilverstone 🏁👏👏

We were delighted to support Blake Davis, Co-Owner at @Davis_Trackhire, with his recent £2 million investment in portable aluminium trackway panels, as well as two new @ScaniaUK trucks.

Driver Rick Curzon from @BreasleyBeds was a dream to work with for our Divisional Sales Manager, Adrian Beese, who supplied this 2018 @Montracon_Ltd box van to the bed business 📸

After seeing a @VolvoTrucksUK advertised on our Facebook page, Irvine Plant Hire quickly snapped it up, and the incredibly special customisation that followed is certainly a sight to behold! 👀