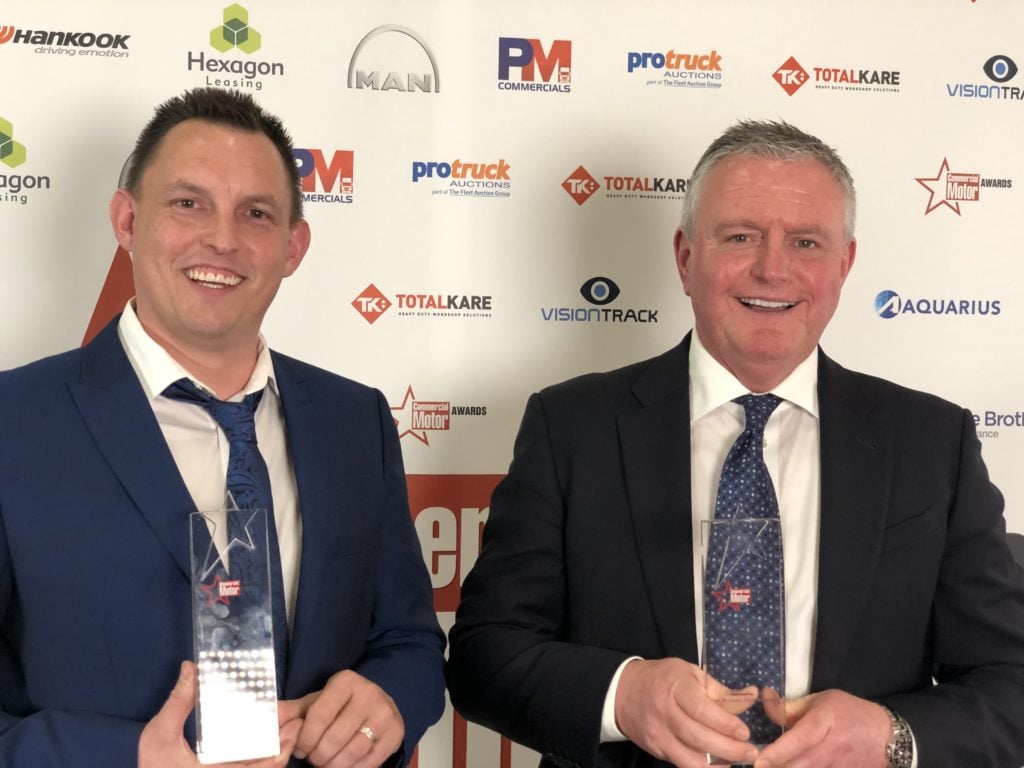 It was a double celebration for our group business Hanbury Riverside at last night’s annual Commercial Motor Awards.  We managed to pick up the Independent Dealer of the Year Award and the prestigious Service to Industry Award went to Sales Director, Lee Smith, reflecting his successful 40+ years in the industry.

It has been a year of massive transition for the Hanbury team, joining our group, relocating to a new site from Essex to Ipswich and evolving into our Asset Alliance Group culture and systems. With this as a backdrop, to scoop this Independent Dealer award is fantastic recognition for the Hanbury team and reaffirms the Group’s investment in Hanbury Riverside.

At the event, a visibly proud Lee collected his personal award from long-time business partner and mentor, Glynn Davies, and no-one could deny that Lee has established a fantastic reputation over many years and the award was very well received by the 400 industry attendees at The Vox.

Overall what a great night for Asset Alliance Group with 5 nominations, 2 awards and in particular some long overdue recognition for Lee and the Hanbury Riverside team.

Who else is looking forward to in-person events this year?! 🙌

We're particularly excited about making our debut at @ITThubEvent on 11th and 12th May at Farnborough International.

We'd love to see you there!

Customers are looking to save 2 things when it comes to finance... time & money! ⏰ 💰
Our Asset Finance team provides low-rate finance for anything from forklifts & warehouse infrastructure to IT equipment & CCTV.
Could we help you in 2022? https://bit.ly/3zFY3zr
#assetfinance

Road transport in the UK is responsible for 92% of domestic transport greenhouse gas #emissions, with commercial #HGVs accounting for 20%. But what does a world without fossil-fuelled vehicles look like & how can you prepare for the inevitable transition? https://bit.ly/3CFiaxr

What is it really like to be a HGV driver in the UK? Working conditions out on the road, paperwork, pay … good stuff too. Join in if you have a view ⬇️

Did you know, our Bus & Coach Finance team can...
👉 Source all vehicle types
👉 Support all contract sizes
👉 Tailor packages with short, medium and long-term finance options

Worried about vehicle security? Police have issued a warning to courier firms on the risk of vehicle theft:
https://news.rha.uk.net/2022/01/12/police-warn-courier-companies-of-theft-risk/content.html

WOW! 😲We will have one very happy driver when he gets his new truck!
#trucker #prideinourefforts